Victor Martin (1940 – 2019) was born in Glasgow on 24th September 1940. He was an only child with a largely absent father. He had a tough childhood, growing up in a tenement building with no bathroom and a shared outside toilet. Vic was, however, an intelligent boy and won a place at Grammar School. He moved to London, working for the Inland Revenue, where he was a Union Shop Steward. He later became a tax consultant. Vic’s marriage to Jilly produced two children, Angus in 1965 and Beki in 1968. However, the marriage did not last and in 1975, Vic married Jenny and became step-dad to Claire and Becky. He was a member of the Campaign for Nuclear Disarmament and the Anti-Nazi League. He was also an active campaigner for socialist causes. Vic took his civic duty seriously and was on the local parish council. Vic was grandfather to Ben, Kizzy, Khloe, Joshua, and Jack. He died on 4th December 2019. 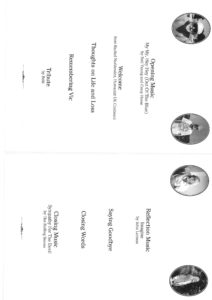 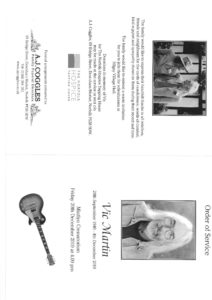