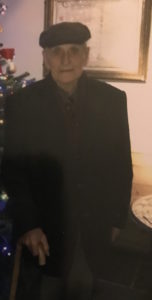 William James “Billy” Western (1932 – 2020) was born in Cadoxton, South Wales, on 3rd June 1932, to Billy and Nellie. He had seven siblings, Dolly, Mary, Helen, Beatie, Margaret, June and Len. He attended Cadoxton School and played football for the junior and senior teams. Billy left school when he was 14 and started work for a company that transported livestock from farms to market. He joined the Royal Engineers for national service when he was 18. He was trained as a driver and was posted to Egypt, serving in the Canal Zone. In 2007, his service was recognised with the award of the Canal Zone medal. Returning home, he went back to his previous job driving lorries. Billy married his childhood sweetheart, Cassie, in 1956. A year later their daughter, Janice, was born. Billy now worked for British Road Services as a class 1 HGV driver, driving all over the UK and Ireland. After 25 years at BRS, he then drove for several other companies including Geest and Moretons before retiring in 1997. He preferred to keep busy and so ran a local cab service, helped neighbours with gardening, as well as driving floats in the Barry Carnival. Billy was a grandfather to Kathryn. In 2016 Billy and Cassie received a card from the Queen congratulating them on their Diamond Anniversary. When Cassie was very ill, Billy looked after her at home. Cassie had been in hospital for the four months before Billy died in Barry on 3rd January 2020. 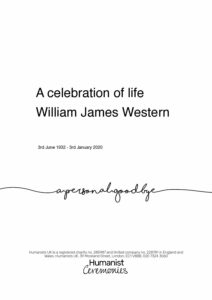 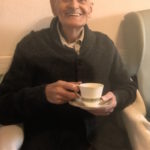 Celebrant: Steve Parry
Tribute to William Western delivered at a humanist funeral in 2020