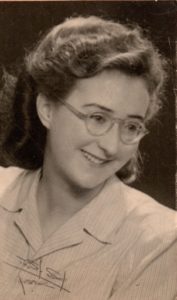 Doreen Hughes (1926 – 2020) was born on 16th September 1926, to John and Charlotte Cassells. She had two sisters, Catherine and Vera. Doreen left school at 15 and took a job at a photographic studio, working with Catherine. She met her husband, George at the local badminton club. They married at St George’s Church, Barrow in 1949. Doreen stopped working when their son, Peter, was born. Linda, Alan and Karen completed the family. In 1976 they moved to a bungalow with a garden, which they enjoyed developing. Doreen was a grandmother. After George retired in 1981, they joined the Hawcoat golf club and took up swimming. Doreen was widowed in 2016, after 67 years of marriage. After her second broken hip, Doreen’s health declined. She died on 9th January 2020. 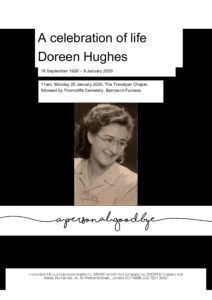 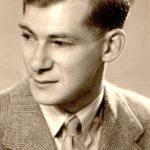 Celebrant: Robert Maddock
Tribute to Doreen Hughes delivered at a humanist funeral in 2020