Jean Mellanby (1931 – 2020) was born on 26th August 1931 to Mark Milburn Wilson and his wife Edith, in Stockton on Tees. Her father worked for the railway and she spent some of her childhood living in a railway station. When she was eight, Jean’s mother died and she and her younger sister, Freda went to live with their aunt Dolly and uncle Maurice. Jean went to the Richard Hind School for Girls. She left, aged 17, with her school certificate and prizes in History and RE, and went to work at ICI Billingham. Jean met her husband, Harry, at her school dance in 1946. They married in 1953, after Harry returned from national service in the navy. Harry’s work in local government took them to the Midlands and to Yorkshire, eventually settling in Somerset in 1966. In that period they had three children, John, Steve and Liz. Jean worked at Street Library for over 30 years. She also worked at the Wellspring bookshop in Wells. Jean was grandmother to Kristian, James, Matthew, Harry and Isobel and great grandmother to Isaac, Freya, Isla and Everley. Harry died in 2017, after which Jean moved to Wessex House in Somerton. She died on 7th January 2020. 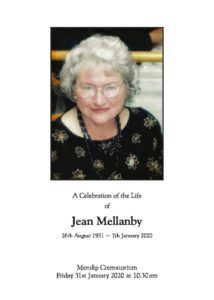