Lisa Jane Birks (1974 – 2020) was born 20th August 1974 to John and Margaret. Her mother died when Lisa was only five years of age. Thereafter her father looked after her, with the help of her grandparents and Auntie Doll, as she got older. She was brought up in Hullbridge and Thundersley, in Essex, and went to Deanes secondary school. As a child she joined the Hadleigh Marching Militaire where she played clarinet and twirled the baton. Her performances included a tour in Switzerland. When Lisa was 16 years of age, she started working at The Royals food court. Through a work colleague, she met Chris who was to become her husband for 26 years. Their son, Ryan, was born in September 1992. Sadly, Lisa’s health started to deteriorate when Ryan was only a baby. She had to give up her job as a carer for the elderly. Lisa loved animals and owned many pets including dogs, cats, and iguanas. She remained stoic about her chronic and progressive illness, which often left her exhausted and isolated. She received treatment at the Royal Free Hospital, including trial treatments so that others might be helped. Lisa died on 18th January 2020. 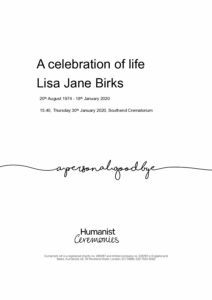