Peter Saunders (1926 – 2020) was born on 30th July 1926 in Johannesburg. He spent his early childhood in South Africa. He and his sister, Jane, were sent to boarding school in Kent. Peter completed his schooling at Blundell’s in Devon. He was called up in 1944. As an ex-serviceman, he was able to study Physics and then Architecture at St John’s College, Cambridge. He married Patricia Annesley in 1954, and they had four children: Emma, Justin, Will and Tabitha. After working in private practice in the partnership Gore, Gibberd and Saunders he joined the South-West Regional Hospital Board in the mid-seventies. Peter’s first marriage ended in 1973. He then married Valerie Smith, and they had a son, Tom. They moved to Chiswick. Peter was an avid cyclist throughout his life. After Peter retired, he and Valerie set up a B&B business. After Valerie died in 2010, he took in lodgers, more for the companionship than the rent. Peter had eight grandchildren. He remained in good health, until he died on 6th January 2020. 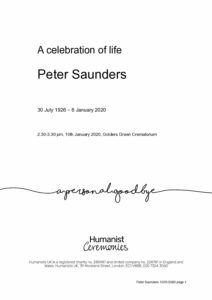 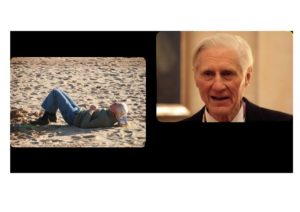