Stephen Robert Lloyd Burton (1956 – 2020) was born Stephen Peacock on 13 September 1956, in Kings Lynn. He lived there with his mother, Crystal, and his grandparents until he was seven. His mother married George Burton, who adopted Steve. They moved to Downham Market where Steve’s half-brother, Howard, was born. Steve completed an engineering apprenticeship and then spent some time working in Belgium and France. On his return to the UK, he went to work for British Sugar at its plant in Wissington. Steve worked for the company for 38 years. Steve met Lavinia in the late 1980s at a dance in Swaffham, and married her at Thetford Registry Office in 1994. They had a daughter, Zoë, in 1998. Steve loved history and particularly the Second World War. One of his favourite places was the Imperial War Museum at Duxford. Steve was a fan of Formula One – he was a race marshal at Snetterton and Donnington. Lavinia discovered that Steve’s biological father had a family in America. Steve, Lavinia, and Zoë went to Alabama to meet his siblings, Virginia, Valerie, Louie, and Fair, in 2008. After leaving British sugar, he became a driving instructor. Steve faced medical challenges in his last few years and died in his sleep on 22nd January 2020. 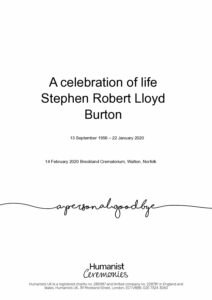 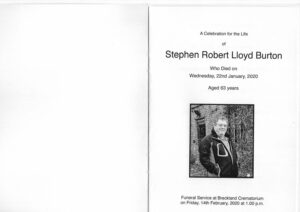