Arthur Gribben was born on 22 June 1933, in Redruth in Cornwall, to Arthur John Gribben and Elsie May Hugo – a younger brother for Irene, and, two years later, an older brother for Jack. Everyone in the family was musical and music formed a large part of Arthur’s life.
He spent his working life in the RAF travelling to and living in many countries around the world. During this time he set up his first swimming club and this sport became central to family life.
Arthur had four children: Amanda, David Peter and after meeting Jean in 1974 her two daughters Susan and Sally became part of the family. Arthur and Jean went on to have Laura in 1980.
His hobby for stamp collecting became a way of raising money for the RNLI which he continued to support to the end of his life. He enjoyed sea fishing and gardening but above all loved his family. He died on 10th January 2020. 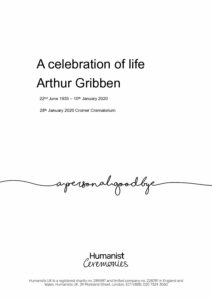 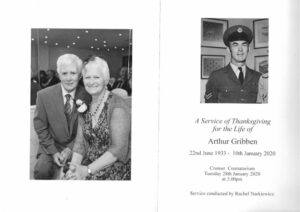 ()
Celebrant: Rachel Narkiewicz
Tribute to Arthur Gribben delivered at a Humanist Funeral in 2020