Ernest Walter Powell (1931 – 2020) was born in Cardiff on the 18th July 1931 to Walter and Queenie. He had two younger siblings, Trevor and Barbara. They grew up during the second world war with their father away in the army for long periods. Ernest attended Splott Road School, followed by the Howard Gardens Grammar School for Boys. He left school aged fifteen and initially worked as a labourer, then a mechanic before starting his apprenticeship with the Wales Gas Board. In 1949, he was called up to do his National Service and joined the Royal Signal Corp, training as a radio operator and was shipped overseas to Singapore and Hong Kong. At the end of his National Service he returned home to complete his apprenticeship and became a gas fitter. Walter married Beryl in the 1950s. Deborah was born in 1959 and Vincent in 1968. They eventually settled in a house with a large garden, where Walter liked to spend his time growing vegetables. They were members of the St Albans Sport and Social Club, where Walter played bowls and skittles. In 1984, Walter retired from British Gas and worked part time until 1990, when Beryl died. Walter was very close to his grandchildren, Matthew, Samantha, Ben and Josh, and would often go on holiday with them. He remained independent until signs of Alzheimer’s appeared and he needed more support and care. He moved into Danesbrook House, where he died at the age of 88 on the 28th of January 2020. 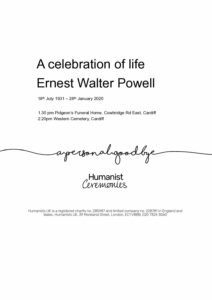 Celebrant: Steve Parry
Tribute to Ernest Powell delivered at a Humanist Funeral in 2020