Olive Settle was born on the 29th July 1928, the daughter of a senior nurse and a head gardener, and her childhood, growing up in the gardener’s house in a park, was a lonely one, though one which taught her to love nature. She signed up under age into the Women’s Land Army, which she hugely enjoyed. In 1949 she married Charles Settle, and they had two children, Paul and Yvonne. Charles was often away with his work for British Rail, and the Army Emergency Reserve, and was later active in the Scouts, which meant Olive again led a solitary life. She worked for an Estate Agents and a builders, and when she retired became a member of the Wilmington Active Retirement Group. She spent her last couple of years at Yvonne’s, where she enjoyed joining in the many social events. She died peacefully on February 4th 2020. 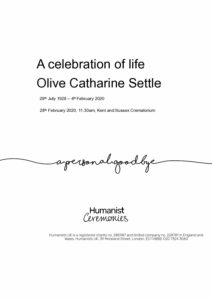 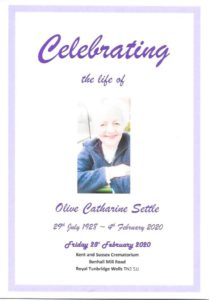