Oliver Fyson (1953 – 2020) was born in Witney on 31st October 1953 to Richard and Ella. He was the fourth of five children. He was the first member of his family to go to university. He studied engineering at City University in London. Once qualified, Oliver worked on a number of major projects overseas, including in India and Iraq. During this time he met Sophie and returned to the UK, where they married in 1984. They lived in London for a while, where Oliver renovated their homes. They moved to Oxford where they started a family. Oliver joined AKSWard, where he was to work for the rest of his career. In the last few years of his life, Oliver was involved with Wolvercote Community Orchard, helping in particular with the annual Apple Days and improving access for people with disabilities. He was diagnosed with melanoma in 2018 but remained active for as long as he was able. Oliver died on 1st March 2020. 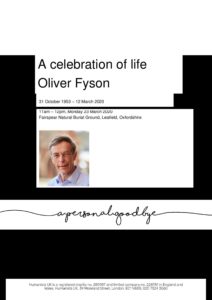