Paula Margaret Varley (1952 – 2020) was born on 16th November 1951 and was adopted when she was four weeks old, by Barbara and Eric Wells. She had a brother, Kevin. Paula grew up by the sea in Westcliff and attended Grammar School, and had a particular talent for English. This led to her work for an advertising agency in London, and in Europe as a translator for a while. Paula also had an artistic skill for drawing accurate portraits of people. Whilst working as a barmaid in London, in about 1980, Paula met Roy Varley, whom she later married in his home town of Norwich. They had three sons, Jack, Thomas, and Sam. Paula became a governor at both Larkman First and Knowland Grove schools. She particularly excelled at supporting children with special needs. Paula battled with both her physical and mental health and suffered the loss of Thomas when he was a small boy. She had one grandson, Ted. Thanks to care from Roy and Sam, Paula was able to remain at home through her illness and died there on 20th February 2020. 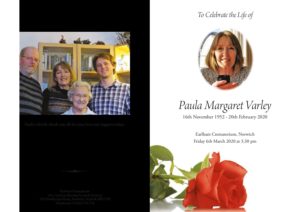