Margaret ‘Madge’ Parsons (1924 – 2019) was born in Holbeck, Leeds, on 15th of February 1924 to Adam and Eliza Moscrop. She had a brother and a sister, and also twelve half sisters and brothers. Madge was educated at Ingram’s Road Primary School in Holbeck. She grew up during the depression years and WWII. Madge was a very talented swimmer and represented Yorkshire. On leaving school Madge worked as a seamstress. At the age of 18, she joined the Women’s Land Army and she served four years, near Thirsk, where she met Claude Parsons. They married in December 1945 and lived in Tipton, before returning to Leeds. John was born in 1947 followed by Andrew in 1949, and Christopher, in 1952. Madge was a keen gardener, producing her own food. She was also a great cook. Madge enjoyed travel and she was fortunate in her life to see many wonderful places. She was a grandmother to Michael, Shane, Gemma and Keeley, and great grandma to Joshua, Millie, Anna, Eva, Maisie, Lewis, Charlie, Maddie and Betsy. After a fall, Madge moved into sheltered accommodation in Thorn Hill Court and then Aire View where she died on 31st December 2019. 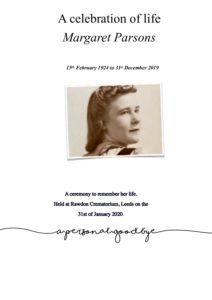