Dr Roger Paul Woods (1948 – 2020) was born in Winchmore Hill, London, on 30th December 1948. He was the only child of Rose and Henry Woods. Roger completed a degree at University College London in Anthropology and Linguistics. He worked for Camden Social Services and gained a Masters in Social Policy, achieving a distinction. In 1992 Roger met his life-partner, Liz Webb. He then lectured at Luton University, where he became Head of Department and a Senior Manager. He took redundancy in 2005. His next role was with Aimhigher, promoting further education to minority groups. He worked as a research consultant until his retirement to Wells-next-the-Sea. In retirement, Roger completed an MA in History and completed his PhD which was awarded posthumously. Roger was a self-taught cook, a knowledgeable bird-watcher and a committed environmentalist. He died on 28th February 2020. 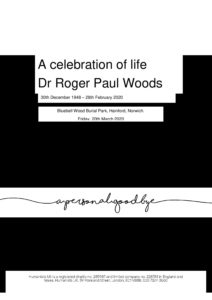 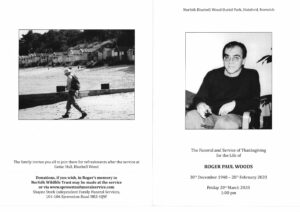 ()
Celebrant: Rachel Narkiewicz
Tribute to Roger Woods delivered at a humanist funeral arranged by their family (2020)