Phyllis Parry (1926 – 2020) was born in Leeds on 17th August 1926, the only child of Percy and Florence Diamond. When Phyllis was two, her family moved to London where she lived with her mum and three maiden aunts. She attended Camden School for Girls and during the war, was evacuated to Lincolnshire. When she returned to London, Phyllis took her Civil Service exams and began work in local government. She volunteered at the Australian Boomerang Club and received a certificate of thanks from the Australian Government for her contribution. She married Pip in 1949 and moved to Reading where Pip was to lecture at the University. Gillian was born in 1951, Tim in 1956 and Andy in 1959. Phyllis did voluntary work for charity and became a grandmother in 1981. After Pip died, symptoms of Alzheimer’s started to show and eventually she went into care at Parklands, where she died on the 31st of March, aged 93. 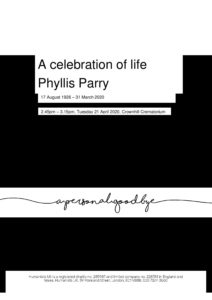