Peter Richard Wisbey (1950 – 2020) was born on 21st May 1950 to Lilian and Harry. He had two sisters, Sue and Jayne. They grew up in Wood Green. Pete passed the 11 plus and went to the Stationers’ grammar school. He later moved to the London Nautical School. He loved art and was good at it so when he left, he trained as a commercial artist. Pete’s first job was at the Queen’s Theatre, but he soon rented space in a studio just off Regent Street with a group of other artists. He moved into directing photography shoots for advertisements, and progressed to Art Director. Pete subsequently studied cabinet making at the London College of Furniture. He received enough commissions to go full-time. He then did an HND in multimedia which led to a degree, and by the early 2000s he was poised to take up a teaching job. He and his partner, Deborah, had recently had a child, Miles, when she was diagnosed with cancer. Pete became her carer and they decided to marry. Deborah died when Miles was 18 months old, and Pete then became a full-time father. Pete died on 21st March 2020, survived by Miles and Rosey, his partner since 2011. 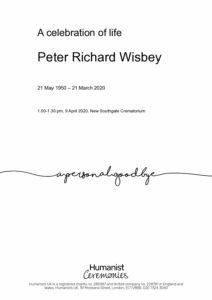