Patricia Vera Barder (1927 – 2020) was born on the 20th December 1927, in Finchley, London to Charles and Dorothy Hyman. She had an elder brother, Neil. At the age of 13, Pat was evacuated to Berkhamsted. She attended Berkhamsted School for Girls, where she enjoyed playing sports including, unusually for the time, cricket. Pat married Robin in 1951. They lived in Northwood where much of their social life revolved around the cricket club. They had three children, Chris was born in 1953, Jenny in 1956 and Tim in 1959. Robin died in 1982. Pat followed cricket, horse racing, tennis and football on the radio and television. She was an independent woman and only stopped driving at the age of 83 and attended Ascot races, aged 90. Pat sustained a broken neck as a result of a fall. Her neck healed but she never fully recovered and died in Burlington Care Home on 28th April 2020, aged 92. 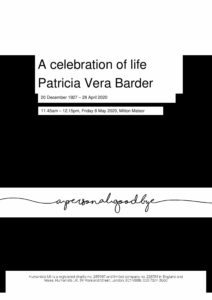