Jennifer Ruth Hughes (1984 – 2020) was born to Tony and Lorraine on 22nd May 1984, in Bramley, Hampshire. She had a twin sister, Cathy. Jenny studied History of Art at St John University, York. She stayed in Yorkshire, got married and had two babies. Theo was born in 2007 and Connor in 2008. The marriage broke down and Jenny found support in a school friend, Stephen. They had worked together on a Young Enterprise Scheme project, for which they won an award. In the summer of 2009, Stephen helped Jenny and the boys to move to Ely. They bought a house together in 2010 and George was born in 2012. Stephen and Jenny married in 2014. She took an OU course, earning a Diploma in Product Design. Jenny took on a development role in the Scout movement and worked for various charitable organisations including Barnados and Real Aid. At the East Anglia Children’s Hospice, she helped secure around £2 million in donations. Jenny started a charity management course at Anglia Ruskin University in Cambridge, but in 2019 she had an emergency operation to remove a spinal tumour. Despite radio and chemotherapy, Jenny moved into the Arthur Rank Hospice where she died on the 6th of March. 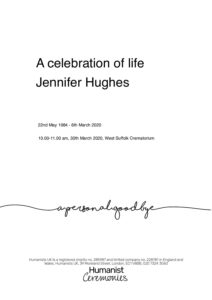 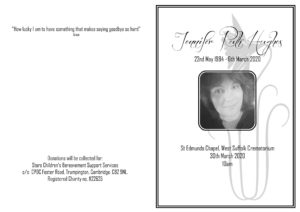