Gordon James Cunningham (1930 – 2017) was born in Coventry on 28 August 1930 to Tom and Marjorie. He had an older brother, Norman. Gordon showed great promise at school, particularly in the sciences, and also in sport. He played rugby for the school and continued to play in adult life. After leaving school, Gordon completed an apprenticeship as a chemist at Wyley’s, on completion of which he was awarded the Freedom of the City of Coventry. At 18 he did his National Service in the RAF. In 1951, Gordon married his childhood sweetheart, Maureen, a marriage that would last for 71 years. Their son, Greg, was born soon after and in 1952 they bought their first home in Coventry. In 1953, Gordon joined the Coventry and Warwickshire Police, rising to the rank of sergeant. In 1955, Julia was born. Gordon retired from the police, after 32 years, at the age of 55. Gordon was a grandfather to Alexandra, Andrew, and Lee. In his final years he began to struggle with dementia. In 2014 he moved into Attleborough Grange care home, where he died on 3 July 2017. 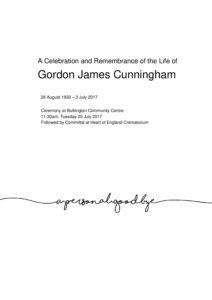