Lynn Repsis Fraser (1948 – 2020) was born in St Paul, Minnesota, on 7th April 1943. She lived all over the US until the family settled in Denver, Colorado in the mid 1950s. She studied Biology at the University of Colorado in Boulder and then, in 1965, drove to New Haven Connecticut to start a PhD in Biology at Yale University. In 1968, Lynn met Bill Fraser and married him the following year, after completing her PhD. She then spent two years as a post‐doctoral research fellow at Yale Medical School. In 1970 they moved to the UK where Lynn worked at the Clinical Research Centre at Northwick Park Hospital. In 1975 she became a lecturer in the Department of Human Biology at Chelsea College, where she rose to Professor of Reproductive Biology. She was author or co‐author in over 130 scientific papers and chaired the UK’s Society for the Study of Fertility. She was also the first woman Chairman of The European Society of Human Reproduction and Fertility. Lynn retired in 2008, and spent much of the following 11 years travelling. In 2018 Lynn was treated for ovarian cancer but died on 9th March 2020. 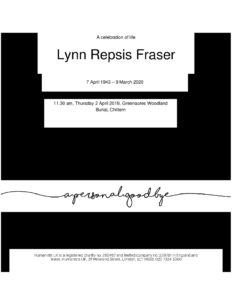