Dorothy Ormerod was born on the 31st December 1925 to Annie and Robert Hargreaves. Of her seven siblings, sadly only Harry and Alice survived childhood. Dorothy married Herbert Ormerod, better known as Bert, at the Unitarian Church in Todmorden on 3rd June 1944. He was a navigator on a Lancaster bomber and was shot down over Germany soon after they were married. He was released after the war and returned home. After several miscarriages and stillbirths Diana Louise was born in 1949. She sadly died at the age of three and the couple had no more children. Dorothy did however channel her maternal instincts into working at a children’s nursery and into being a loving aunt and great aunt, demonstrating her talents at crochet, knitting and baking. Dorothy owned a haberdashery shop in Todmorden, where she enjoyed the interaction with her customers. After 67 years together, Bert died in 2011. As a couple, they had travelled a lot, but now in her 80s, Dorothy embarked on a world tour, visiting family in Australia, New Zealand and Florida. She eventually moved to Lee Mount Care Home in Halifax, as dementia slowly developed. Dorothy passed away peacefully on 8th May 2020. 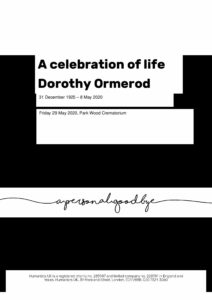