Percy Charles Rush, better known as Bob, was born on 28th September 1925 in the East End of London. He had three siblings, Millie, Kitt and Albert. Bob attended Manchester Street School until the age of 14. After a short spell working in a printing factory, he embarked upon a career as a milkman at College Farm. At the age of 17, Bob joined the Army, following the death of his mother. He served in France, Belgium and Egypt as an ambulance driver, as part of the Royal Army Medical Corps. Returning to civilian life, he went back to being a milkman, this time with Express Dairies, where he would work for 49 years. In 1963 Bob married Janet at Islington Registry Office. They moved to Tufnell Park, where they raised six children, Stephen, Jenny, Lyn, Kevin, Lorraine, and Angie. Bob and Janet enjoyed holidays in Spain and liked to cruise. After he retired from Express Dairies, Bob worked for the Meals On Wheels service for many years. He eventually retired at the age of 83. He had many grandchildren and great grandchildren. Bob died on 18th June 2020. 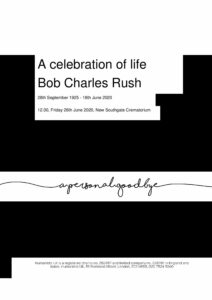