Junior Aitken was born on 18th October 1942, to Isa and Tucker, in Newmains, Lanarkshire, where he lived for 29 years. He had five older brothers and a younger sister. He went to Newmains School until the age of 15, when he left to work in a garage. Junior spent most of his working life in the construction industry. His final job was as a delivery driver. In January 1966, he met Rosemary whom he married in August that year, at Wishaw registry office. After a year living with Junior’s parents, the couple moved into a council house. Over the next four years, Colin, Sharon and Dawn were born. The family moved to England in 1971, where Junior’s brother had moved earlier. Junior had a particular passion for Benidorm in Spain, where he and Rosemary visited many times. He was a fan of football and horse racing and loved cats, helping out at the Cat’s Protection League where Rosemary worked. They had three grandchildren, Billy, Sam and Londi. The couple lived at Overstone Lakes for 14 years, until Junior’s dementia and lung cancer forced a move to Northampton town. He died on 24th May 2020, at Cliftonville Care Home, aged 77. 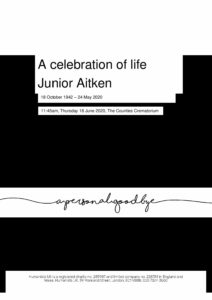