Martin John Smith was born in Wolverhampton on 1st July 1959 to Jean and Bernard. He had three siblings, Paul, Sue and Robin. He passed his eleven plus exam and went to Penistone Grammar School, followed by Huddersfield Technical College. Having started work at Shelley Textiles, Martin made the decision to move to the South of France. He worked on a campsite in Canet-Plage. He became fluent in French and ultimately became head of security. After 16 years, Martin returned to Yorkshire, settling in Hawes and working in the hospitality industry. He progressed his way up from night porter to front of house manager at The George Hotel in Huddersfield. When his mother’s health deteriorated, Martin gave up his job to become a full-time carer for her. He also established a gardening business, working around his caring role. He was a proud and loving uncle to Callum, Michael, Jennifer, Emily, Ashley and George. Martin died on 14th June 2020. 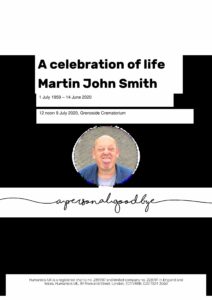