Michael Walmsley was born on 9th September 1960 to Pauline and Roy. He had a younger brother, David, and was close to his maternal grandparents. He grew up in Holywell Green, West Yorkshire. Michael was a lifelong Liverpool FC supporter, travelling all over England to watch them play and sometimes made the trip to Europe to see some of their international matches. His parents divorced, but Michael had a good relationship with both of his step parents. He went to school at Brooksbank in Elland. His first job was at Waller Brothers mill in West Vale. He later worked as a book-binder at Remploi. After leaving home, he got a flat in Stainland, where he lived with his cat, Socks and his enormous DVD collection. Michael was an uncle to Grant and a great uncle to Eva. He died on 4th May 2020. 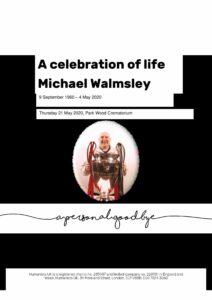