Anthea Auty was born on December 2nd 1940, in Dewsbury, to Dorothy and Albert Parnell but the marriage did not work out and because Dorothy had to work Anthea was brought up by her grandmother and aunt until Dorothy met and married Eric Dewhirst in 1948. So Anthea then had two half brothers, Joe and Michael and later two half sisters, Moira and Lorna. Anthea left school at fifteen and worked in a local factory as a mender. At seventeen she met Keith at the Galleon dance hall in Dewsbury and they married on 12th March 1960. Anthea loved dancing and taught Keith to jive, later they won several ballroom dancing medals. They lived in Horbury where Alison was born in January 1962 and in 1968 moved to Pontefract. In 1976 Anthea qualified as a nurse and worked for many years at the Pontefract General Infirmary and then became an industrial nurse for Rowntree Mackintosh. Anthea and Keith were a sociable couple hosting popular parties, barbecues and family get-togethers and they shared many holidays with Alison and her husband John. Anthea loved animals, especially dogs and over 30 years they had 6 Rottweilers, proudly winning Best in Breed at Crufts in 1992. She was an active grandmother to Dale born in 1989 and loved taking him to Fairburn Ings Nature Reserve and took great interest in her great grandchildren, Jayden and Alfie, born to Dale and Kim in 2012 and 2016. Anthea bravely fought her final illness and was looked after by Keith at home with support from all the family until moving to The Prince of Wales Hospice where she died on 19th August 2020. 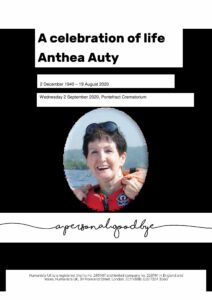