Freda White was born in Yiewsley in Middlesex on 7th January 1927, the fourth of six children to Fred and Elizabeth Robinson. Growing up she enjoyed the freedom of the countryside and also experienced city life in Nottingham visiting her aunt and uncle. When Freda was 9 the family moved to a new estate in Farnborough in Kent and Freda progressed from the village school to the senior school in Orpington via the 11+ exams and then at 13 attended Chiselhurst Technical college to learn shorthand and typing. However, her Dad was transferred to Blackpool for war work and as their house there was under the flightpath of German bombers they spent many a night in the air raid shelter. At 15 Freda went to work in a solicitor’s office but at 17 she joined the Land Army, in Nottingham and then in Kent. Here she met her future husband Jack, her friend Christine’s cousin, at a local dance and they married in their early twenties. They had three children, Geoff, Hazel and Sheila and life as a young mum was hard, looking after the elderly sitting tenant in their house in Farnborough and a young family, with few conveniences and general post war deprivations. Nevertheless, the children remember wonderful family Christmases and family holidays. Freda took strawberry picking jobs to help financially and later office and pub work. She and Jack moved to Poole where Jack died when Freda was only 66 but she determinedly kept fit and busy and was an active grandma and great grandma into her 90’s when she began to experience signs of dementia. She moved to the Court House Care Home in 2019 where she was very happy until her peaceful death on 11 August 2020. 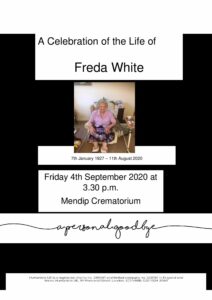 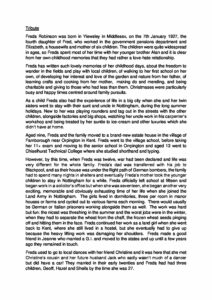 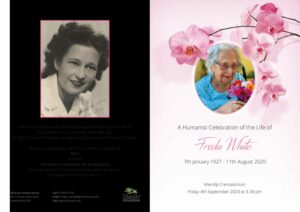