Geoffrey Berry, Geoff, was born on 14th June 1947 in Heptonstall, West Yorkshire, to George and Elsie Berry, with elder sisters Barbara and Sonia and later, a younger brother Philip to whom Geoff remained very close. At school Geoff preferred practical subjects and in his spare time pursued his fascination with cars, especially Minis. He became a mechanic with the Post Office in Bradford, attending evening classes to get his qualifications, later transferring to BT where he enjoyed working in the engineering division for more than 30 years. He met Diane in his teens and courted her attentively. They married on 24th July 1971 at Carlinghow Parish Church in Batley followed by a two night honeymoon in Blackpool. Throughout their happy marriage they made many wonderful friends through their various hobbies and interests. They followed Bellevue Speedway and made friends at the Prospect Inn in Halifax. Then Geoff raced for Hebden Royd Motocross Club. Always keen on country music he and Diane took up line dancing. Friends here introduced them to cruising which they took to enthusiastically, exploring all over the world. They were drawn into backstage work with the Halifax Amateur Operatic society when their dog Monty won a part in Annie. Monty and his companion Max, two of the several golden retrievers loved by Geoff and Diane also appeared on stage at the Alhambra in Bradford, this time accompanied by Geoff himself. Geoff was a keen football fan too attending Manchester United matches with friends and playing five-a-side himself. Geoff remained active, enjoying life and working until the Covid lockdown started. Nobody would have anticipated his death, on August 15th 2020. 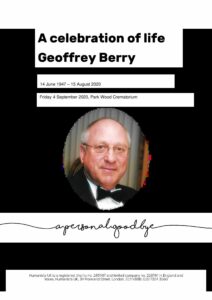