Ian Yates was born in Barnsley General hospital on 28th November 1960, to Rhoda and Ken Yates, younger brother to Joan, Geoff and Denise. Ian was interested in music from an early age, singing and playing drums to his school friend Kev’s guitar at 11 and then, with Kev, joining the Barnsley Music Centre Concert Band in the mid 1970’s as kit drummer, touring with them to Scotland, Germany and Austria. His passion for drumming stayed with him, he was always happy to come to the aid of any band in need of a drummer. He started work on Haigh Carpet Stall on the market before training to be a policeman with West Yorkshire Police. His undercover work would take him away for months at a time but he always returned to The Cricketers Arms in Holmfirth where he was a much loved regular. Nicknamed ‘Rowdy’, he enthusiastically joined in music nights and karaoke and was involved with the charity band. He also enjoyed holidays with his mates, including several golfing holidays to Tenerife organised from The Cricketers. Ian had grown close to his niece Terrie when he was just a teenager and when she settled in Cornwall with her husband Neil and children Jack and Ethan he enjoyed spending time with the family there. Ian died on 30th August 2020. 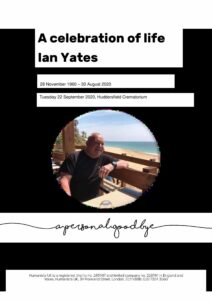