Richard Ian Godwin, Richard, was born on 6th November 1968 and grew up in the quiet Oxfordshire parish of Ducklington where his father Ian was a builder and his mother Anne worked in the village shop. He and his younger brother Peter attended local schools. Richard joined his father in the construction business, specialising in ground works and they grew very close. Forced by illness to leave building work, and prevented from joining the Police Force by his eyesight, Richard joined the Post Office, becoming an old school, ‘pillar of the community’ postie in Aston for over 20 years where he was appreciated and liked by everyone, especially the local dogs, for whom he always carried treats. At the West Witney Sports and Social Club he met Amanda and became ‘dad’ to her three year old daughter Casey. They had many happy holidays together in Cyprus but there were also difficult times when Richard suffered a prolonged period of mental health problems. He and Amanda decided to separate for a while but they all continued to care for each other as a family. They grew close again in early 2019, before Richard had heart problems and surgery and were married in the Dominican Republic in November 2019. Planned travels were made impossible by the Covid pandemic and instead Richard enjoyed the pleasures of being at home. He had been back at work for just a week before he died on 12th August 2020. 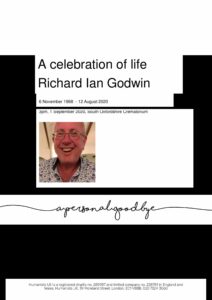