Sudha Young was born on 5th November 1935 to Hiralal and Kalavati Topiwala. She was born and raised in Kenya, where her father worked as a GP. She had five younger siblings, Hansa, Mina, Panna, Harshad and Surbhi. After two years in pre-medical school, she was awarded a place at the Grand Medical College in Mumbai at age 18. After qualifying as a doctor, she returned to Kenya to begin work at a hospital in Nairobi, where she met her first husband. They had a son, Yatin, but the marriage ended and Sudha went to study in England, leaving her son with her mother. When Sudha returned to Kenya, she worked at the Coast General Hospital as a Consultant Haematologist. Sudha then met Douglas, whom she married in 1972, creating a family of five, with Douglas’ children, Dianne and Christopher. The family moved to England, where the children were all at boarding schools. She bought a house in New Malden and secured a job at Kingston General Hospital. She also worked at St George’s and St Thomas’ hospitals in London. In 1982 they moved to Horsley in Surrey. Sudha retired from the NHS in 1993 due to a second prolapsed disc. She enjoyed gardening, reading, theatre and travel. She joined the University of the Third Age and became a member of a wine tasting group. In her later years, Sudha developed late onset Bipolar Disorder, and had long periods of depression. She was also diagnosed with Alzheimer’s Disease. She died on 23rd July 2020. 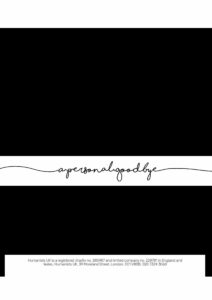 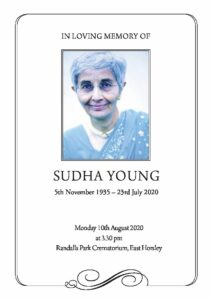