John Russell Savory was born in Sydenham on 3rd June 1936 to Lillian and Ernest. He had a sister, Margaret. In 1940 they were briefly evacuated to Sherborne in Dorset. He learned to play badminton and cricket with the local church teams and continued to play throughout his life. In 1947 John passed his common entrance exam and gained a place at Dulwich College. He left school in 1952, and trained as a chartered accountant at Bagshaw & Co., in London. He qualified at the age of 22, and eventually became a partner. Even after moving to a bungalow in Biggin Hill in 1952, John continued to ride his motorbike to work every day until his retirement in 1988. In the 1970s John became a single dad to his two children, Fiona and Paul. He met Sue at the local tennis club and they married in 1984, Her children, Tim and Helen also joined the family. In retirement, John took up golf and twice became Men’s Vets Captain for Park Wood Golf Club. He and Sue enjoyed golfing and skiing holidays together. He had seven grandchildren, Nicola, Chris, Beth, Louise, Kirsten, Jack and Billy, and four great-grandchildren, Archie, Amber, Ivy and Reuben. In 2012, John had a stroke which affected his movement and speech. Sue cared for him until her death, after which he was looked after by carers. John died on 20 August 2020. 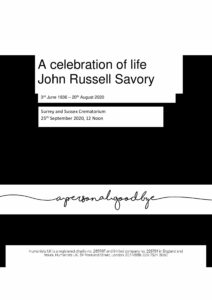 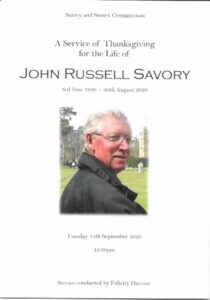