Ida Mary Steele was born in Wraysbury, Buckinghamshire, on 26th October 1923, the youngest of three children. The river Thames provided opportunities for swimming and rowing. After leaving school, she trained as a shorthand typist. In 1949, Ida married Ken Steele, a skilled cabinet maker. They set up home in a flat in Staines High Street, but his work meant that they moved around a lot. They had one child, a daughter named Sue. When Sue was about ten they moved to Cornwall, where they acquired a remote run-down farmhouse which they renovated. Ida was not pleased when they had to move back to London and live in a flat. She took a part time job with a firm of solicitors. Ida started to suffer headaches and visual issues, which was eventually diagnosed as glaucoma. Many treatments were tried but without success. They moved again, to a bungalow in Shoreham-By-Sea, and Ida took up painting. After Ken’s death in 2000, she managed to remain in her own home with the help of a carer but, after a fall in 2017, Ida reluctantly moved to the Holm Lodge care home in Ringmer. She died on 26th August 2020. 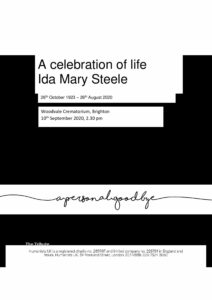