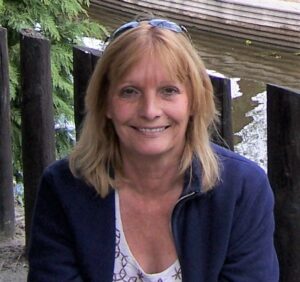 Deborah Elizabeth Smith was born in Tanzania on 3rd November 1958, to Harry and Doreen. She had two older brothers, Nicholas and Gregory. She grew up in Africa, where her father worked, until the age of ten. She attended a boarding school in England when she was seven but she didn’t like it there and ran away, aged eight. Remarkably she found her way back to her parents in Africa. In 1968, the family returned to the UK, where Debbie finished her education. Debbie trained to be a police officer but then moved into business management and IT. She later became an Information and Technology lecturer at Bournemouth and Poole College. She spent 25 years in that role and played a significant part in the college’s administration. In 1979 she married Chris. They had one child together, Simon, of whom Debbie was very proud. In 1994 the marriage ended. Debbie was diagnosed with stage 4 breast cancer but she defied the odds and, over a long period of time, her health improved. In 2002 Debbie met her partner, Colin. They were together for 18 years but only married in March 2020, after her cancer returned. She died on 12th August 2020. 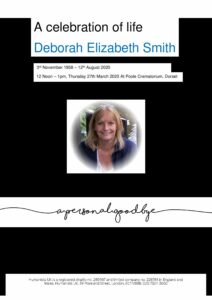 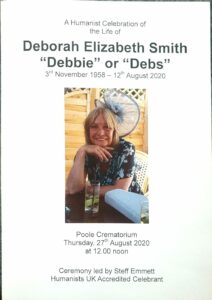