Ada Ivy Damms, Ivy, was born on 18th December 1932 at 6 Court, Apple St, Neepsend, Sheffield the third child of eight to Arnold and Gertrude. She grew up there and then from 1938, in Parson Cross, with her brothers and sisters, Walter, Fred, Joe, Arnold, Bryan and Alan, and her big sister Winnie, though Walter died at an early age. Ivy went to Meynell Road School until she was fifteen when she went to work at Burdall’s, and later variously at Swann-Moreton, Bassett’s, Hadfield’s and then at Bass Charrington until early retirement in 1983. She met her first husband, George Alan Reynolds at Gilbow’s, they married on December 26th 1953 and had three children, Linda, Pete and Alan Malcolm. George suffered a severe stroke aged 35 and Ivy worked hard to support the family. She met Reg Chapman on a blind date in 1973, they married in 1974 and were very happy together until Reg died in 2003. Ivy welcomed her children’s partners, Robert, Cheryl and Diane into the family and was grandma or Nannan to Mark, Robert, Paul, Colette, Lewis and Jo, as well as great-grandma to Jake, Megan, Bertie, Jessica, Harvey and Tommy. Ivy died on 20th August 2020. 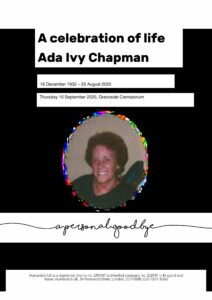 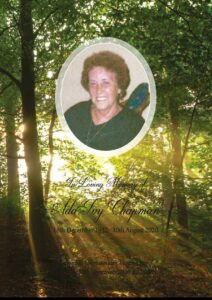