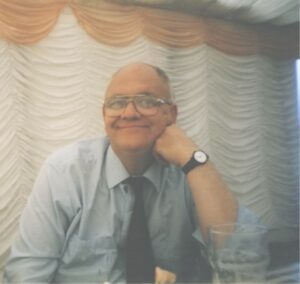 Iain George Renfrew (1939 – 2020) was born in Paisley on 17 May 1939 to Jeannie and Tom. He had two younger siblings, Kay and Jim. To avoid National Service, he joined the Merchant Navy in 1955. Iain met Annette whilst on shore leave in Swansea and they married in 1962. He left the Navy and the couple set up home in Waun Wen, Swansea, where they brought up their two daughters, Kay and Kim. Iain worked ashore as an engineer but during the 1970s and 1980s he took a job as chief engineer for an oil rig supply firm which involved a lot of overseas travel. He then worked in the Estates Department at Swansea’s Singleton Hospital until his retirement in 2004. Iain was fond of jazz. He was a keen reader and enjoyed visiting local art galleries. In retirement he liked to visit his daughters wherever they were in the UK and Europe. He died on 23 August 2020. 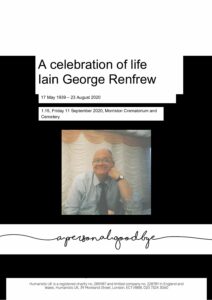