Pat Berry (1927 – 2020) was born in Sunderland on 5th May 1927 to Celia and Leonard. She had two siblings, Celia and Len. Pat passed her eleven plus exams and attended Bede grammar school, where she became head-girl. She was only twelve when WWII started. Pat trained at Langham Tower in Sunderland to become a teacher, teaching netball, swimming, games, dance, and PE. She was also a netball referee, and had lifeguard qualifications. She married Simon Berry in 1949. They were married for 64 years and had a daughter, Jane. Outside work, Pat was a member of the local history group and the wildfowl and wetlands trust and volunteered at the local hospital. She enjoyed yoga, drawing, painting, tapestry and birdwatching. After Simon’s unexpected death in 2013, Pat moved to London to be with Jane, her grandchildren and great grandchildren. She joined Finchley Victoria bowling and croquet club, making many new friends. She died on 12th November 2020 in Barnet Hospital. 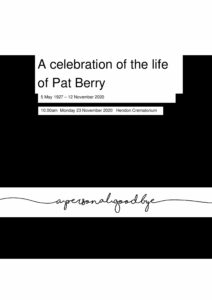 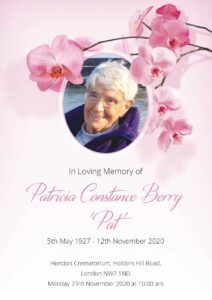