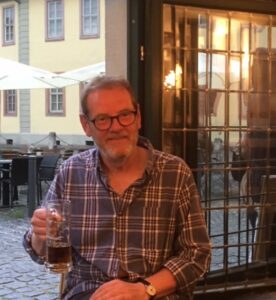 Keith Antony Harris (1953 – 2020) was born on 19th October 1953. He grew up just outside Lancaster with his parents Larry and Barbara, workers at the local mill. After primary school in Halton he attended Lancaster Grammar School taking ‘A’ levels a year early. He did a year at Warwick University but took his degree at Lanchester Polytechnic in Coventry. After graduating, he took the hippy trail to India and then taught English to Iranian air force cadets until the revolution. After spending some time in the United States, he returned to Coventry where he met Gill. They had three children, Ellen in 1980, Joel in 1983 and Elijah in 1991. Keith started a career with Royal Mail, in the early 1980s, in Exmouth. He moved up through the ranks from the counter to top management with his promotions meaning frequent moves and lots of commuting. He took early voluntary redundancy during a major restructuring exercise and then joined the Learning & Skills Council. He retired at 60 and he and Gill moved back to Budleigh Salterton with time for making music and other interests including the Budleigh Film Society. They also enjoyed walking along the coast and in the countryside and birdwatching down by the River Otter. 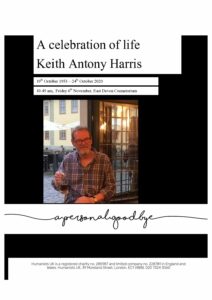 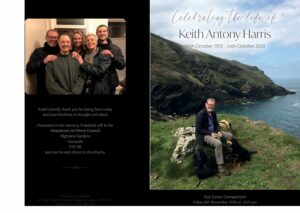