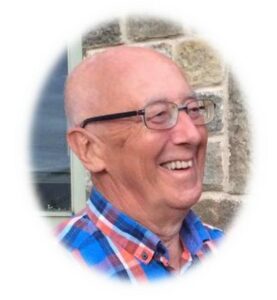 Peter Richard Ask (1946 – 2020) was born in Sheffield on 7th August 1946, to Richard and Kathleen. He had two sisters, Pauline and Julia. They grew up in Wisewood. He preferred hiking and rock-climbing to school and once led a Youth Association expedition. He was also a talented table tennis player, with a place in the Guinness Book of Records for the longest continuous table tennis match. Peter started to train as a chartered accountant, shifting to internal audit before taking a computing degree and passing with first class honours. He became head of the computer department at G R Stein, a subsidiary of the Hepworth Group. He set up his own company, Milden Systems, and travelled extensively, implementing computer systems for various companies across Europe. Peter got married to Jane in 1972. They had two daughters, Jodie and Jaime and four grandchildren, Jacob, Emma, Harry and Felix. In his spare time Peter sang and played folk guitar, as well as being a keen cricketer. Peter then moved to Spain and worked in Pamplona, followed by Carcassonne in France. He and Jane eventually moved back to Yorkshire, where Peter occupied himself with golf and bridge. Despite a terminal diagnosis, Peter’s last few years were full and included writing a novel. He died on 1st October 2020. 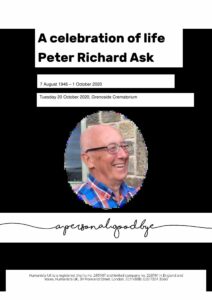 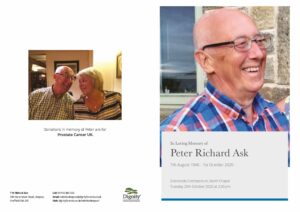