Joan was born on 22nd August 1930 in Chirk, near Wrexham in North Wales. She had two elder brothers, Syd and Jim, and a younger brother, Stan. Joan worked as a physiotherapist at the Queen Elizabeth II Hospital in Welwyn for most of her career, and contributed to a book, ‘Physiotherapy in some Psychiatric Conditions in Neurology for Physiotherapists’ by Joan Cash. She was a member of the Chartered Society of Physiotherapists.

She married Leslie William Parnell Dodgson, and in 1960 they moved to Welwyn Garden City with their one-year-old daughter Ann. Their second daughter, Carol, was born there in 1962. Les died in 1971, aged 41, after which Joan cared for her mother until her death. In 1995 Joan moved in with Ann and her family, in Hadstock, where she enjoyed spending time with family, including grandchildren Joe and Ellie. In 2020, after a hospital stay, she moved into residential care in Symonds House, Linton, just before the Covid-19 lockdown. She was full of praise for the commitment and courage of the staff there. She died on 6th October 2020. Her daughters both predeceased her. 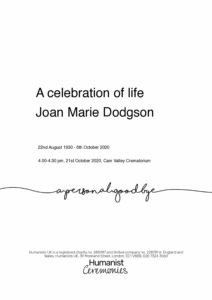 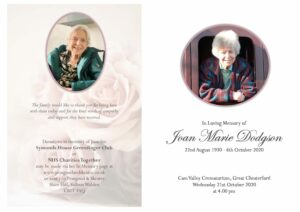