David was born near White Hart Lane football ground in Tottenham on 3rd of July 1943, the third of seven children, and became a lifelong Spurs fan. His very first job was as a messenger for Barclays Bank on the Seven Sisters Road. When the family moved to Takely in Essex, his father arranged an apprenticeship for him as an aircraft engineer at Stansted Airport, and he worked there as a flight mechanic with Transmeridian Air Cargo, remaining at Stansted for his whole career. He started as ground crew but in the 1970s he started flying as well – travelling all over the world except for Australia and New Zealand. He always returned to his family with gifts and stories to tell. At one point the whole family was about to move to Hong Kong but this never came about. He enjoyed his work, and the camaraderie of colleagues.

He played football for the local team in Takely, and he met his wife Linda when she was working in the local pub. They married in April 1971 and had two children, Frances and Tim, of whom he was very proud. He continued to enjoy watching  sport – darts, golf, rugby and cricket, and supported Tim when he took up rugby. David was also devoted to his grandson, Harry, with whom he spent a lot of time. Despite suffering from ill health for the last 20 years of his life, he never complained. He died on 15th October 2020. 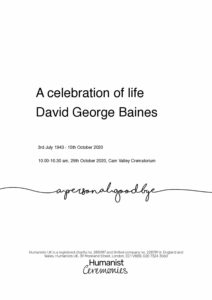 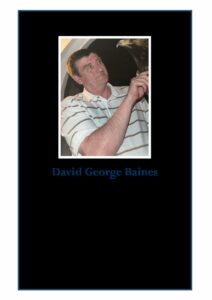