Brian was born on 16th August 1936 at Rochford Hospital to Ivy and Harry. Aged 8 he was evacuated with his sister Maureen (6) to Rochdale then returned to live in Beresford Rd Southend but their parents separated and life was difficult. At 18 Brian served his National Service with the RAF in Yorkshire then returned to study at Southend Technical College and went on to work in the technical office at Southend Airport. He married Norma on 12th June 1971 at St Andrews church, Shoebury and bought their first house in Eastern Close, Southend. Their son Daniel was born in 1973 and daughter Annette in 1975. Brian became a postman that year and worked until retirement in 1996. The family moved from No 1 Eastern Close to No 8 where Brian made the most of the large garden. Brian was immensely proud of his family and always interested in his sister’s marathon running and in the exploits of Daniel and Yvonne’s children, Ruairi, Finlay, and Ciaran. 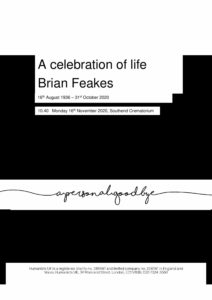