John Martin Leo was born in County Limerick to James and Mai on 9th March 1951, the ninth of ten children. He was only ever known as Martin. He studied at University College Cork where he met one of his oldest friends, P.J. Another very good friend was his neighbour Chris. Martin had a successful career as an accountant and later completed an MBA. In his spare time he enjoyed a variety of building projects around the house and garden. He also loved sailing, first at the Welsh Harp Reservoir and later, on the Isle of Wight, where he and his partner Mili had a house. He shared 30 years of his life with Mili and they were very happy. They travelled widely together, across Europe, the USA, northern Africa and Thailand. Mili looked after him devotedly through the last three years of his life as he suffered increasing ill health, leading to his death on 3rd December 2020. 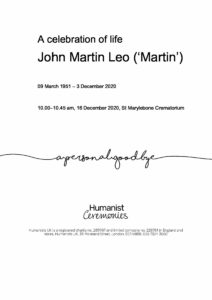