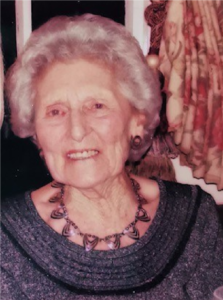 Elsie Christine Hart was born 25th December 1920 in Shoreditch, the eldest of six, Gladys, Dolly, Jim, Evelyn and Ann. Her father James Webb worked at Odham’s Press in Fleet St then the family moved to Cranham in Essex where the children enjoyed growing up in the countryside. She and Gladys worked at the Co-Op shirt Factory in Upminster until Elsie joined the WRAF in 1941 and was posted to Newton Ferrars in Devon. Elsie’s sweetheart, Sydney, had joined the Royal Navy in 1938 and they married in Hornchurch in March 1944 returning to active service. They first lived with Elsie’s parents, where in 1946 Lynn was born. They were allotted a first home in a prefab in Rainham then moved on to a council house back in Cranham where Ian was born. When Sydney died in 2000, Elsie moved to a retirement complex and then on to Audley Court in Saffron Walden. Elsie lived a very active life despite losing her sight, moving finally to live with her daughter Lynn in 2009. Elsie died at home, four days after celebrating her 100th birthday. 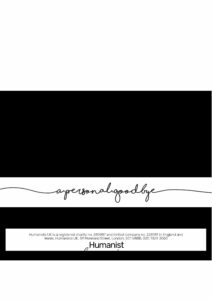 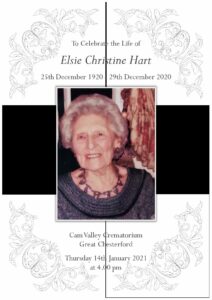