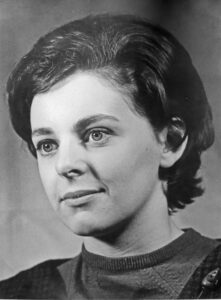 Jennifer Watts (1943 – 2020) was born in Tonbridge, Kent to Betty and Alan on 4th January 1943. Jennifer and her brother Robert moved with their mother to Banbury during the war. In 1957 the family moved to Earley, near Reading, where Jennifer won a scholarship to the Abbey School. She then attended Marlborough Grammar School in Wiltshire, followed by Cheltenham Teachers College. Instead of becoming a teacher, she became an accountant at the Caleys John Lewis store in Windsor. Jennifer married her first husband, David Williams, in 1966. They moved with David’s teaching posts between Birmingham and Oxfordshire. They had three children, Clare, Lorna and Martin. Jennifer worked in a number of jobs in education administration and in the local council offices. She lived with Michael Watts from 1983. They were married in 1994. She became an advocate and fundraiser for people affected by loss of sight and hearing, and was fluent in British Sign Language. She volunteered at the village store and worked as treasurer for the Village Hall committee. Jennifer loved to travel and took part in car rallies across Europe. She was a skilled artist and loved cats. In 2019, her worsening Alzheimer’s required specialist care so Jennifer moved to the Orders of St John Care Trust at Townsend House in Headington, where she died on 20th December 2020, from COVID-19. 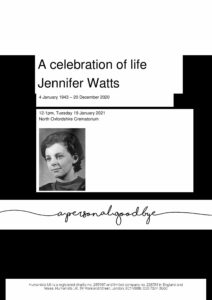