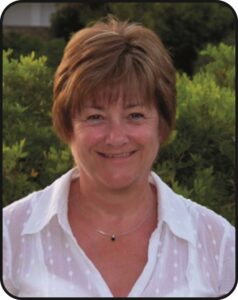 Judy was born in York, to Dorothy and Reg Clitheroe, younger sister to John and older sister to Gill. She attended Shipton Street Primary School followed by Queen Anne Grammar School, and was a keen girl guide. Following in her father’s footsteps, she joined Rowntree’s in 1968, working in the main office. She then moved to Central Accounts where, in 1973, she met Mick Jones. They married and moved into their first house in Haxby in 1976. Judy became Assistant Budget Officer, leaving in 1979 to take up part-time work when she had her first child, Katy. In 1981 their second daughter, Caroline, was born. By now they were living in Wigginton, and Judy had a long association with their school, Wigginton Primary, acting as secretary of the PTA for some years. From the early 1990s she worked for 15 years for the Great North Eastern Railway (GNER), eventually becoming the Assistant Treasury Manager. She was very family orientated and a fond grandmother to Meg, Chloe and Lorna. 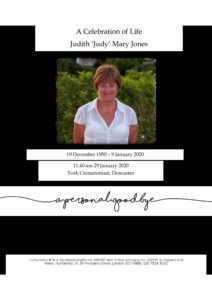 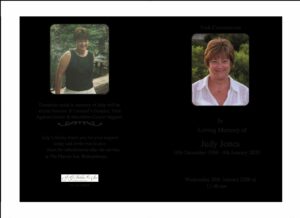