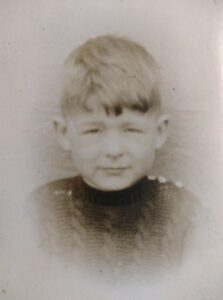 Joseph Thomas McKeown, or Joey as he was known to all, was born in the little village of Aghalee, Northern Ireland, on 6th February 1934. He had just turned 87 when he died unexpectedly on 19th February 2021. He was still living in the same weaver’s cottage where he was born. Joey was the second of four sons to Joseph McKeown and Helena née Hendron. His brothers were Billy, Stanley and Ronnie. They were quiet, but industrious lads, who grew up during the war and knew all about hard work. After leaving school Joey worked first at Barbour Linen Mill in Lisburn, then later at Lurgan Hospital, where he spent the rest of his working days. Like the other men in his family he had a passion for motor bikes. That passion was not even dented by a serious accident back in the 1950s, though in later life he did take to riding a scooter, complete with old-fashioned helmet and goggles. In fact, Joey was an old-fashioned bachelor himself and did not pay much attention to fads or fashion. For his whole life he refused to have a telephone. He preferred to leave the talking to the poets and to Dickens, which he loved to read. He also loved his sports, particularly rugby and football and he enjoyed listening to classical music and to Irish country and western. He loved animals, walking and the simple things in life. Joey is buried in Old Aghalee Cemetery, an ancient and peaceful place, barely a mile from the weaver’s cottage. He joins his parents and generations of other McKeowns who are buried there. 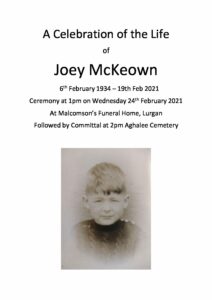