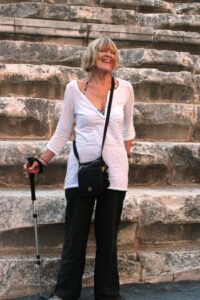 Iris was born in Cork in 1932. She came to England at an early age and grew up in Bournemouth with her younger siblings Esther and Ken. Their parents were Plymouth Brethren. On leaving school Iris went to Paris as an au pair to widen her horizons before returning to train as a nurse at the Middlesex Hospital. Marriage followed and then a few years as an army wife. Paula was born in Benghazi in Libya and Richard in Osnabruck, Germany. After time with the army in Scotland and Yeovil the family moved to Somerton in Somerset and then on to Exeter where Iris joined the new renal unit at Whipton Hospital. After a short spell health visiting, Iris moved into education at Exeter College, where she met Geoff Barr. Alongside her teaching of human biology and various related courses, Iris also taught yoga until suffering a serious accident. Iris played her part in college life; for a period she was membership secretary of the lecturers’ union (then called NATFHE).  At 64, Iris graduated from the Open University though she interrupted her studies to qualify as an acupuncturist. She built up her acupuncture practice and then undertook allergy testing before, realising that all health work has a psychological and social aspect, she also studied Neuro Linguistic Programming (NLP). Iris read avidly, had a wide ranging taste in music, (she took up the violin in her 80s), loved poetry, had fun travelling with Geoff, had an eye for colour and design and relished time with her children and grandchildren, Tim, Will, Charlie, Sophia and Rosie. Iris developed renal disease and died on 2nd February 2021. 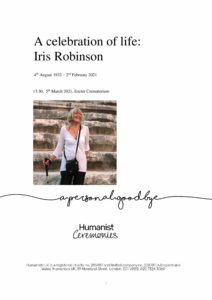 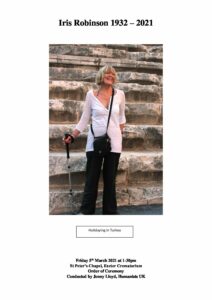