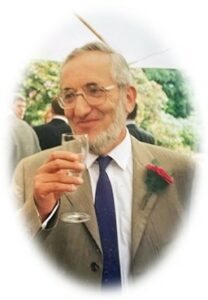 Nick was born on 21st December 1938 the second child (Catherine was born 1935) of Sydney and Leila. The family were evacuated to Berkhamsted while Sydney stayed mostly in London working at the Ministry of Supply and on air raid duty. After the war the family moved to Highgate where Nick went to Primary School and first met his future wife Julia. He attended the liberal boarding school Bryanston in Dorset and then went to Cambridge and on into teaching at Rickmansworth Grammar School. When taking a school trip to the Victoria and Albert Museum he bumped into Julia again who was studying at the Royal College of Art. They married in 1963 and in 1964 went to Tanzania on the Teachers for Africa scheme where Rob was born. Jo was born on their return to England where Nick taught at Crownwoods School, Eltham, but their third child, William, died aged just nine months. The family moved to Gloucestershire where Nick was a deputy headmaster and Jess was born in 1976 when the family moved to Crowborough where Nick became headmaster at Beacon Academy and later Tom was born. Nick retired in 1994 and bought himself a piece of woodland which remained a passion and a major occupation. Nick made a great and lasting contribution to the local Labour Party, doubling the Labour vote in the 1997 General Election. He also worked for the Citizen’s Advice Bureau and the local Foodbank, chaired the local bridge club and was a thoughtful contributor to two book clubs. Nick and Julia moved to a beautiful house, Goldsmiths, where, during the Covid pandemic, they had “a good lockdown” surrounded by the Sussex countryside before Nick died on 23rd February 2021. 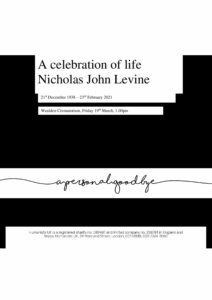 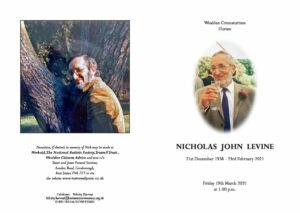