Matthew ‘Matt’ Trotter (1939 – 2021) was born on 14th January 1939 in Washington, County Durham, to Bob and Rosie Trotter. He had five siblings, Joe, Jackie, Bobbie, Billy and Maggie. Matt joined the RAF aged 15, after his father and brothers. He reached the rank of Sergeant in Bomber Squadron. He served several tours abroad in Bahrain and Egypt. Matt excelled at sport and represented the RAF at cricket and football. He also earned a Football Association coaching qualification. Matt met Christine in 1962 when he was stationed at Finningley. They married in 1963 and had two daughters Lindsay and Beverley. Matt retired from the RAF in 1972 and became a self-employed door-to-door insurance salesman and rose to become regional director for the company. His work took the family to live in Norfolk and Wales, returning to Doncaster in 1987. He retired in 2001. Matt had four granddaughters, Olivia, Chesca, Gabriella and Maddie. He was renowned for his fine singing voice and his willingness to help family, friends and work colleagues. Matt died on 18th April 2021. 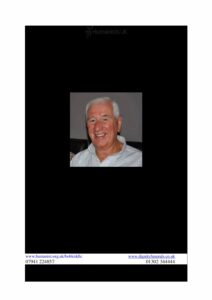 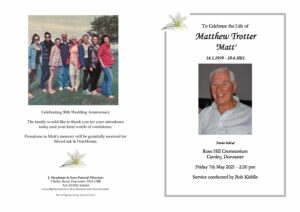